Art is a central part of the indigenous Australian's life and takes many forms, shapes and sizes. Traditionally it was made for purely cultural reason and was not able to be created or viewed by people with insufficient knowledge. Although recently their artwork has been created for public viewing. Regardless of the traditional private purposes Indigenous artworks still remain inspired by the traditional marks and symbols from the dreaming and artist's country and play a central role in the indigenous people's life. 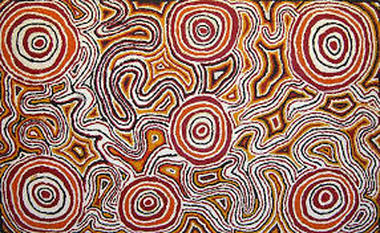 This image was produced  by Maggie Yilpi and portrays her journey through South Australia which is an example of a central part of her life.